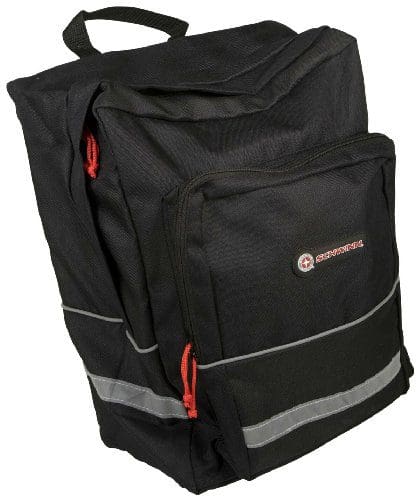 I have been biking into work for a while with a backpack. When I purchased my Raleigh commuter I also got a rack for the back. I had fully intended to get some panniers right away and see how they worked. It took me until July to get a set. I went to a few local bike shops looking for what was available. After 3 shops it was clear that I would have to look elsewhere. Many shops had small panniers or expensive waterproof large ones. What I wanted was a reasonable priced pannier that could hold my laptop and a few items. Most were too small for a 14 inch laptop and if there were large enough, it was just one large compartment.

I did find one to try at Ada Bikeshop downtown. I got them home and realized they were just too large for the bike. My feet would hit them when peddling. So to my surprise I was in a Meijer store looking at a kickstand for my daughters bike and I saw a set of Schwinn Panniers. The were only $27, came in a pair, and would fit a laptop.

So this week I set off to work with one strapped to the rear rack. It was great, no backpack and I did not notice the weight. However, when crossing the major 5 lane road near my house, the pannier got stuck in my spokes. I did not have a clue what it was but it was loud. Since I was crossing with traffic coming I just peddled through the noise till I was safe. It was only then that I noticed that the bag had bent into my spokes and tore a hole in the fabric.

I now have a piece of duct tape over the hole, and a better method of securing the pannier. I am extremely happy with these bags that were about 100 bucks less than the alternative.